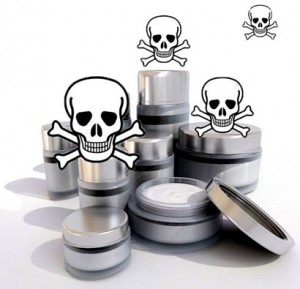 Labels on cosmetics and body care products are a tough code to crack. The industry is so shockingly unregulated that it’s usually impossible to trust the claims that manufacturers place on their products. A word such as “natural” can be used by anyone for anything. Even “organic” is misleading. Companies are supposed to use an organic label only if all ingredients are certified-organic, but they can also say it’s “made with organic” if it contains a minimum of 70 percent certified-organic ingredients. Regardless, 30 percent still leaves a lot of room for toxins.

The whole industry has a “innocent-till-proven-guilty” approach to ingredients. Unless a chemical used in beauty products is proven to cause harm to human health, it is classified as GRAS, or “generally recognized as safe.” This classification is upheld by the U.S. FDA and hardly has the best interests of consumers at heart.

The best thing we consumers can do is read ingredient lists carefully in order to avoid chemicals that are known to be harmful, even though they continue to be widely used. Here is a list of the top 20 toxins to avoid, according to Gillian Deacon’s 2011 book There’s Lead in Your Lipstick: Toxins in Our Everyday Body Care and How to Avoid Them.

Coal Tar: A known carcinogen banned in the EU, but still used in North America. Used in dry skin treatments, anti-lice and anti-dandruff shampoos, also listed as a colour plus number, i.e. FD&C Red No. 6.

Ethoxylated surfactants and 1,4-dioxane: Never listed because it’s a by-product made from adding carcinogenic ethylene oxide to make other chemicals less harsh. The Environmental Working Group (EWG) has found 1,4-dioxane in 57 percent of baby washes in the U.S. Avoid any ingredients containing the letters “eth.”

Fragrance/Parfum: A catchall for hidden chemicals, such as phthalates. Fragrance is connected to headaches, dizziness, asthma, and allergies.

Hydroquinone: Used for lightening skin. Banned in the UK, rated most toxic on the EWG’s Skin Deep database, and linked to cancer and reproductive toxicity.

Lead: Known carcinogen found in lipstick and hair dye, but never listed because it’s a contaminant, not an ingredient.

Mercury: Known allergen that impairs brain development. Found in mascara and some eyedrops.

Paraphenylenediamine (PPD): Used in hair products and dyes, but toxic to skin and immune system.

Phthalates: Plasticizers banned in the EU and California in children’s toys, but present in many fragrances, perfumes, deodorants, lotions. Linked to endocrine disruption, liver/kidney/lung damage, cancer.

Placental extract: Used in some skin and hair products, but linked to endocrine disruption.

Toluene: Known to disrupt the immune and endocrine systems, and fetal development, it’s used in nail and hair products. Often hidden under fragrance.

Triclosan: Found in antibacterial products, hand sanitizers, and deodorants, it is linked to cancer and endocrine disruption. Avoid the brand Microban.

All the FM GROUP products, based on herbal ingredients!

MAIN MENU
FM TEAM - NEWS
LATEST POSTS
We use cookies on our website to give you the most relevant experience by remembering your preferences and repeat visits. By clicking “Accept”, you consent to the use of ALL the cookies. Read More
Cookie settingsACCEPT
Manage consent

This website uses cookies to improve your experience while you navigate through the website. Out of these cookies, the cookies that are categorized as necessary are stored on your browser as they are essential for the working of basic functionalities of the website. We also use third-party cookies that help us analyze and understand how you use this website. These cookies will be stored in your browser only with your consent. You also have the option to opt-out of these cookies. But opting out of some of these cookies may have an effect on your browsing experience.
Necessary Always Enabled
Necessary cookies are absolutely essential for the website to function properly. These cookies ensure basic functionalities and security features of the website, anonymously.
Functional
Functional cookies help to perform certain functionalities like sharing the content of the website on social media platforms, collect feedbacks, and other third-party features.
Performance
Performance cookies are used to understand and analyze the key performance indexes of the website which helps in delivering a better user experience for the visitors.
Analytics
Analytical cookies are used to understand how visitors interact with the website. These cookies help provide information on metrics the number of visitors, bounce rate, traffic source, etc.
Advertisement
Advertisement cookies are used to provide visitors with relevant ads and marketing campaigns. These cookies track visitors across websites and collect information to provide customized ads.
Others
Other uncategorized cookies are those that are being analyzed and have not been classified into a category as yet.
SAVE & ACCEPT